Rifle rounds:
So had a discussion with the other men in the family the other day as we were buying the last of the bullets we could find.  Poppa mocked my choice as I did not get expanding ammo and instead went with M855 which is a really nasty round especially when fired from a 20" barrel which it was made for.  There is however method to my madness in getting that stuff that is for offline conversations.
Frankly I do not shoot it and horde it along with with my M193 55 grain I was a dummy and shot up what a buddy loaded for me.  That stuff is like a laser and has nasty wound ballistics for FMJ.  Then there is the Russian ammo both of my rifles eat it up like candy my little rifle printed a 1.5" group off hand at 50 yards so the ammo is not a problem.

I have a hodge podge of expanding ammo ranging from 55,62 grain hollow point, 64 Bitter Root Valley PSP, 64 grain Silver Bear SP which has downed deer, and my personal favorite 69 grain BRV hollow points which I only have about 15 left as they have accounted for four deer in two years (yes I missed once).  I also have a prized box of Black Hills 75grn Match Moly coated hollow points.

So with pistol I carry Federal Hydro shock, have a box of Hornady Critical Defense, horde the Remington UMC 115 grn JHP which actually passes they FBI penetration and expansion tests and is a heck of a buy for the money.  When you can find it buy it I have.

So for the money what is the best bang for the buck in your opinion.

Posted by trollsmasher at 11:26 PM No comments:

Sorry for the Christmas break but it has been crazy.


FFL holders have been busy the last few weeks as many of you I am sure know there are no AR15s, AKs no high capacity magazines, and no freaking ammo.  At one point the the NICS system was shutdown and firearms dealers had to turn people away.  The FBI actually had to bring people in from other duties to get the backlog taken care of however there is a storm brewing on the horizon.


The gun world and firearms owners are about to be in for a siege like we have never seen.  Also we are taking a gouging from the firearms industry and some large chains such as Cheaper than Dirt who abandoned  firearms sales and had the nerve to charge $50 for a PMAG.  Dick's Sporting goods being dicks and boning Troy and pulling their great new rifle (which I am kicking myself for not driving 80 miles to getting one).  However I am more than happy with my new one.  Wal Mart has also pulled modern sporting rifles and my local gunshops are selling them as fast as they get in, Academy has also contemplated pulling modern sporting rifles as well.  I saw yesterday American Eagle .223 for $17 a box and people paying it.  I actually witnessed this three times women coming into the store I was at and say "what is an AR15 and I need one."

So while gun owners are fighting for their right to even own a modern sporting rifle the retail portion of the industry is boning us as well.  As they say however make hay when you can.  I do have to give some props as some people are not taking advantage of the situation. Mako still has magazines available and at normal price.  Buy smart there are still deals out there you just have to watch for them.

Posted by trollsmasher at 10:55 PM No comments:

While not our usual meme here I thought everyone should know that Palestine was upgraded to non-member  status of the UN which de-facto recognizes the terrorist groups the PLO and HAMAS nation status.  You may want to get with your congress critter and voice your opinion on continuing to offer financial aid to the Palestinians. I am for yanking all funding to them, Egypt (which we have sort of), Pakistan who is no friend of the U.S. see them keeping our supply lines open through blackmail.

Something to think about.
Posted by trollsmasher at 6:16 AM No comments:

A great article by Ernest Emerson of Emerson knives a lot of these are common sense but common sense is sometimes the best self-defense.  Like I tell the ladies in my self-defense courses do not wear a micro-mini skirt and hooker heals into a dive bar.  Nor should we wander about at night counting the money in our wallets.


Posted by trollsmasher at 1:43 PM No comments:

So now that we have established our needs for every day carry (EDC):
Survivor's Mindset
Cell Phone
Firearm / Reload
Knife
Flashlight
Less than Lethal
Wallet: ID, CCW permit (always try to have $20)

The question is do you carry all the time even at home?  It is hard to get me to part with my weapon even at home especially after I heard about the two home invasions in my neck of the woods where one person was stabbed. While I am not a gun slinging gun fighter I do want to have a fighting chance if someone comes blowing threw the door.  Having to try to make it to the bedroom for a piece would not be good.  I have a friend who has his J frame 24/7, yet another one that does not carry at home due to small kids, and 2 others do not but keep their piece close.

So thoughts?
Posted by trollsmasher at 6:41 PM No comments:

According to the latest FBI crime statistics report one is more likely to be beaten to death than killed with a long gun ie. Rifle or Shotgun.

Since 2007 there has been a 16.2% decline in murders committed with personal weapons which are defined as “hands, fists, feet etc.” The number of murders of this type in 2011 totaled 728.
While gun ownership has dramatically increased since 2007, murders for both the shotgun and rifle categories have seen declines faster than the rate of personal weapons related crime.
The rates of decline for the shotgun and rifle categories are 22.1% and 28.7% respectively. In 2011 there were 356 shotgun murders and 323 rifle murders for a total of 679 murders.

Overall murders by firearms of all types have been decreasing since 2007.  This is something to keep in mind when you are talking to that friend who thinks firearms need further control.
Posted by trollsmasher at 7:24 AM No comments:

When I bought my Glock I also purchased one of the holsters after reading the reviews which are very positive I did not think I could go wrong for $14.00.  So carried it with this holster until I got my Serpa which I like contrary to what people say it won holster of the year for 2012 and is used by everybody.  Anyway I always look for better ways to carry concealed and was flipping through Massad Ayoob's new book "Gun Digest of Concealed Carry."  He showed an inside the belt carry which snugs the pistol up closer than an outside the waistband  while it is not inside the waist band (which I hate). 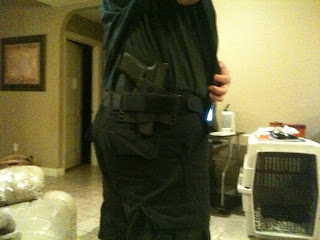 So I pulled the Glock holster back out and it turns out that the holster fits exactly between my belt loops on both my BDUs and Tac Pants. 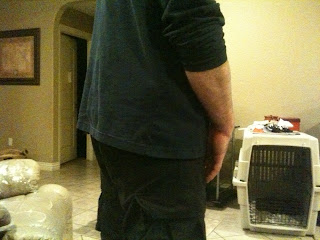 This is just with a t-shirt covering.

I wore this with a 19 round magazine last night and you could barely tell I had the weapon my wife does the final check before I leave home and she asked if I was even carrying when I put the 15 round magazine back in.

Posted by trollsmasher at 8:45 PM No comments:

Contact:
Jarhead.gunsmith@yahoo.com
Please contact me through website
I am primarily an AR guy but will clean and service anything your bring in. If it something I cannot fix I will tell you up front and recommend someone who can if I have to.
Firearms Transfers -$25

Labor - $25 per
hour
Materials
– cost plus shipping plus 5%
Written
Appraisals - $10
Minimum Charge - $25
All
services are billed at an hourly rate plus materials unless otherwise noted.
General Shop Services:
Weapon Function Test - $25
Remove Fired Case from Chamber - $25
Remove Live Round Chamber - $25 plus
$20.00
Remove Obstruction from Weapon - $25+ depending
Legally shorten shotgun barrel 18.5” no
shorter do not ask.

Cleaning:
Detailed Cleaning - $35 for two day turn
around $45 for next day

Sights:
Scope
Mounting – Hourly rate, customer to supply optics and mounting hardware or I
will order anything requested.
Rifle must be drilled and tapped for scope mounting.
Bore Sighting + $10
Zeroing
- Plus ammunition
and target cost. I will zero with full
metal jacket or cheapest ammunition unless otherwise supplied by customer.

All NFA laws will apply.